In My Opinion: Ishta Devata Darshan 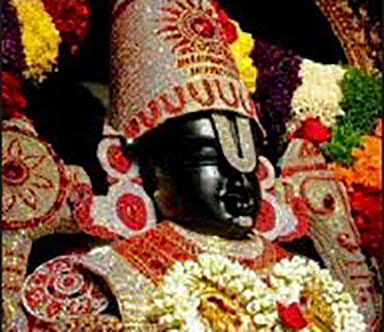 Diamond Studded: close up of Sri Balaji at the Tirupati Shrine in Andhra Pradesh.

I was resting soundly in tirumala Hills when the cottage doorbell awakened me at 2 am. Hitching up my dhoti, I headed for the abode of Sri Venkateshwara, India’s most venerated place of pilgrimage. After happily signing a form saying, “I believe in Lord Venkateshwara,” I was escorted to the entrance of the temple’s inner sanctum where all eyes were focused on a pair of heavy brass doors. Two dozen pilgrims had come to witness the ritual called suprabhatam, the waking of the Lord.

Reeded horns, goat-skin drums and resonant bells reverberated off the walls of the fabled South Indian temple as the doors swung open. Ghee lamps and swirling incense mingled with the scent of camphor. One by one, devotees stepped over the threshold, entering a narrow corridor leading to a heavy stone vault. An imposing figure stood at the far end of the passage. As I approached the colossal murti, faint feelings of piety grew into riveting thrills of energy. Balaji’s commanding ten-foot black granite form stood directly in front of me, His right hand opened in a gesture of blessing. Atop His head rested a crown ablaze with diamonds and a ten-centimeter emerald. Like children at the feet of a mighty monarch, we stood in awe of our king. Seated at Balaji’s feet, we watched priests drape huge, colorful garlands over His broad shoulders while a team of pandits chanted Vishnu Sahasranama. With each of the 108 sacred names, a priest offered rose petals at Balaji’s feet. I felt simultaneously drawn into the form in front of me and into myself.

For most in the Hindu tradition, the Ishta Devata, one’s chosen Deity, epitomizes their most cherished spiritual bond. It’s quite natural to find a personal God more appealing than the Advaitic concept of a non-dualistic Absolute that never assumes individuality, remaining forever devoid of attributes. But Divinity in the form of a God, such as Balaji, is able to have personal relationships with every aspect of itself, including its devotees.

A Himalayan yogi once offered me a method for getting closer to my Ishta Devata. He called it merging, and described a meditation of breathing awareness into the heart, and feeling ourselves becoming one with our Ishta Devata. Mantra recitation is another time-tested practice. My Himalayan yogi friend told me that if we are fortunate enough to understand the connection between our mantra and our Ishta, it is our God’s grace. If not, then our God is keeping it a secret.

It is not necessary to be told the true nature of one’s mantra. It is self-revealing. The mantra and its associated Deity are identical. If one’s mantra is a form of Krishna, then Krishna will reveal Himself in due time and grant spiritual insight. From that moment on, the devotee will love his or her God, secretly, in the inner sanctum of the heart. When we finally come face to face with the one we’ve been calling, and enter into a personal relationship with our Ishta, we are nearing the goal. In the end, it’s the grace of God that matters most.

When we close our eyes to meditate, we are with our personal God, much like having Balaji’s darshan in His inner sanctum. The nature of the mantra is such that it summons the bearer of the name. That is why our spiritual teachers often encourage us to repeat our mantra throughout the day, and even at night.

Bhagavan dwells deep within each of us, residing in our hearts as pure and innocent love. Meditate on your mantra in your heart, remembering that repeating our Ishta Devata’s name is the highest dharma in life. With practice, one day the inner sanctum of the heart will become like Lord Venkateshwara’s abode atop the Tirumala Hills. Then we will have realized that the purpose of a pilgrimage, whether outer or inner, is union with our Ishta Devata.