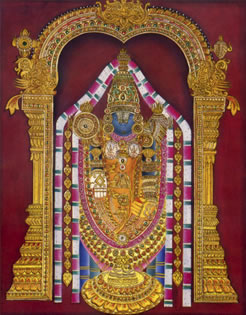 Reed horns, drums, and bells intoned within the ancient temple. We were about to enter the sanctum sanctorum, the abode of Lord Balaji. One by one devotees stepped over the brass threshold into a narrow, dimly lit corridor leading to a heavy, stone vault. At the end of the passage, a vague form was visible. As we drew near to the form, faint feelings of piety became thrills of blissful energy. I was overtaken almost forcefully by his power and presence. We stood wide-eyed against a brass rail in full view of Balaji’s imposing eight-foot black granite form. Vertical white stripes covered his eyes and his broad form had massive hands plated in gold. His right palm opened to us in a gesture of blessing. Over his strong shoulder was draped fine silk studded with precious gems. His chest and shoulders were massive and impregnable like the granite that formed them. Resting on Balaji’s head was a cylindrical crown set with dazzling diamonds and a ten-centimeter emerald said to be the most valuable in the world. We stood in awe of Balaji, like infants at the feet of a mighty monarch.

We sat spellbound like children listening to a fairytale sung in a language we didn’t understand. I felt drawn into the form in front of me and into myself simultaneously. It was a most pleasant sensation. The distinction between inside and out dissolved like a curtain of mist.

One by one we passed in front of him. With palms pressed together, we made our secret offering from the heart and basked in transcendent waves of darshan. Now we were seated front and center at the feet of the granite king. We watched as two priests performed tholam, the offering of flowers to the lord. Bright, colorful garlands were carefully draped over Balaji’s shoulders, chest, and waist, and a priest waved incense about the room as pundits chanted continuously throughout the ceremony. We sat spellbound like children listening to a fairytale sung in a language we didn’t understand. I felt drawn into the form in front of me and into myself simultaneously. It was a most pleasant sensation. The distinction between inside and out dissolved like a curtain of mist. No thoughts disturbed the pervasive, tranquil feeling as serenity gave rise to bliss. Bliss turned into devotion and devotion was drowned in the ocean of Being. Devotion emerged again, swelling in great waves before receding into nothingness. A simple request found its way into my heart: ‘Balaji, may this be my reality always.’

The ritual was magnificent, and at the same time, it was nothing at all. Balaji was all that mattered. As we sat, a gap in time occurred, a period that was unaccounted for. Then, inexplicably, I found myself standing again after having been seated during the offerings. The ceremony was now complete, and I watched the head priest turn and smile slightly as he carried a brass bowl in my direction. Instinctively, I bent forward as he placed the bowl on the crown of the head. Pleasant sensations raced up and down my spine filling my head with light and my heart with love. Everyone in the room received the blessing in turn, a waterless baptism of sorts.